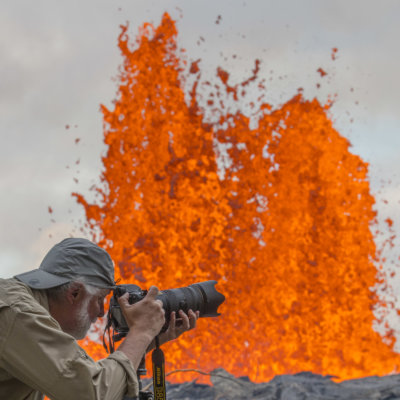 G. Brad Lewis is internationally recognized as a leading volcano and nature photographer. His volcano images have appeared on the covers of a number of magazines, including Life, Natural History, Photographer's Forum, and Geo, and within the pages of Time, Outside, Fortune, Newsweek, Stern, National Geographic, and many other publications. Additionally, Brad's lava and erupting volcano pictures have received numerous awards and been widely exhibited. Interviews with Brad have been broadcast on the NBC Today Show, CBS Evening News, and the Discovery Channel's, "How'd They Do That?" Print interviews and photo essays of his volcano lava photographs have been featured in many magazines, including Photo District News, DigitalFoto, Studio Photography & Design, and Outdoor Photographer. His photographs are found in numerous private, corporate, and public collections around the world, as well as in fine galleries and through major stock agencies. Inspired by beauty and variety, Brad is based out of Hawaii, Utah, and Alaska, traveling several months each year to pursue his art.