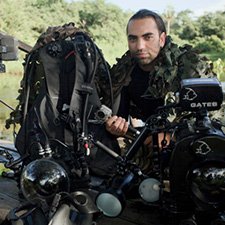 Cristian Dimitrius is a cinematographer, photographer, biologist and television presenter specializing in wildlife and natural history. On land or underwater, from ants to whales, Cristian’s innovative cinematography and unorthodox camera techniques are helping to revolutionize the way people see and perceive wildlife. Cristian pushes the boundaries of wildlife filmmaking with his amazing still images and stunning video sequences, made with the most advanced camera technologies available. In addition to several film credits, Cristian has shot and produce for the world’s top television networks including the BBC, National Geographic, Discovery Channel, Globo TV, History Channel and Animal Planet. Cristian Dimitrius’s long-life mission is to inspire people to fall in love with our planet through his images, arousing the desire for knowledge and conservation of the place we all can call home.

His History
Born in 1975 - Itajubá / MG, he has always been involved with nature. After attending Biology went to work full time with scuba diving in various parts of the world, where he also filmed and photographed his students and clients. After returning to Brazil, he began to produce a series of stories for TV Globo and travelled to different places around the world always searching for beautiful images of wildlife. Today he is one of the few wildlife filmmakers and photographers from Brazil, who dedicate his full time to this work. The wildlife is part of the routine of this Brasilian who never forgot when his true vocation became clear to him. Amid the mountainous city where he was born he learned to love nature.

Currently, Cristian is also one of the presenters of the segment Domingão Aventura (Big Sunday Adventure) in Globo TV Domingão Faustão Show. His sucessfull stories have been aclamed by the public and critics, for he has been innovating with their cameras ingenious, bringing images never shown on Brasilian television.