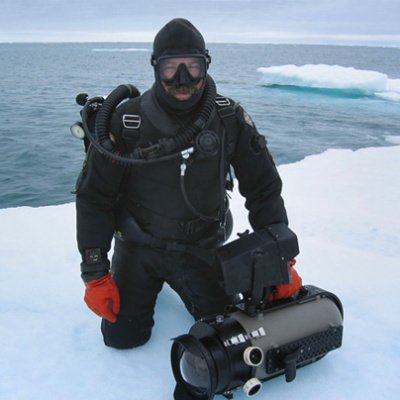 
FROM THE FREEZING CLIMES OF ANTARCTICA and Greenland to the heat and humidity of the Amazon, Chuck Davis has worked as a specialist in marine and underwater photography and cinematography. His motion picture filming credits include work on several IMAX films, including Ring of Fire (underwater lava scenes), Whales, The Greatest Places, Amazing Journeys, Search for the Great Sharks, and two Academy Award-nominated IMAX films, Alaska: Spirit of the Wild and The Living Sea (underwater/marine scenes of Monterey Bay). Daviss cinematography experience has also included numerous expeditions worldwide with the Cousteau filming teams working with the late Jacques-Yves Cousteau and his son Jean-Michel during production of the Rediscovery of the World TV series. He has also worked on feature films such as Warner Brothers SPHERE and documentary projects for the Discovery/Learning Channel, BBC, PBS, CBS, ABC, A&E, NBC/Universal and National Geographic Channel. Recent cinematography projects include work as the director of photography for Jean-Michel Cousteaus Ocean Adventures PBS TV series, the Smithsonians Who We Are (a special dome-theater film for the National Museum for the American Indian, in Washington, D.C.), and the avant-garde production, Crystal Palace, filmed in Papua New Guinea for director, Mathias Poledna.