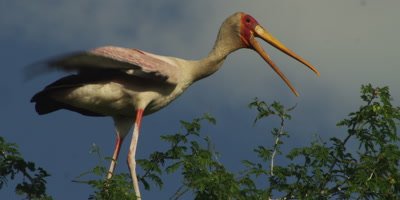 Storks are large, long-legged, long-necked wading birds with long, stout bills. They belong to the family called Ciconiidae, and make up the order Ciconiiformes. Ciconiiformes previously included a number of other families, such as herons and ibises, but those families have been moved to other orders. Storks dwell in many regions and tend to live in drier habitats than the closely related herons, spoonbills and ibises they also lack the powder down that those groups use to clean off fish slime. Bill-clattering is an important mode of communication at the nest. Many species are migratory. Most storks eat frogs, fish, insects, earthworms, small birds and small mammals. There are nineteen living species of storks in six genera. Various terms are used to refer to groups of storks, two frequently used ones being a muster of storks and a phalanx of storks. Learn more about Stork