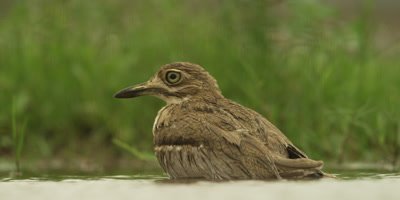 The stone-curlews, also known as dikkops or thick-knees, consist of nine species within the family Burhinidae, and are found throughout the tropical and temperate parts of the world, with two species found in Australia. Despite the group being classified as waders, most species have a preference for arid or semi-arid habitats. They are medium to large birds with strong black or yellow black bills, large yellow eyes—which give them a reptilian appearance—and cryptic plumage. The names thick-knee and stone-curlew are both in common use, the preference among authorities for one term or the other varying from year to year. The term stone-curlew owes its origin to the broad similarities with true curlews (which are not closely related). Thick-knee refers to the prominent joints in the long yellow or greenish legs and apparently originated with a name coined in 1776 for B. oedicnemus, the Eurasian stone-curlew. Learn more about Thick-knee