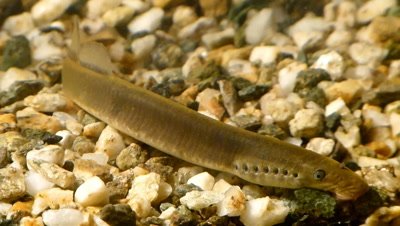 Lampreys (sometimes inaccurately called lamprey eels) are an ancient extant lineage of jawless fish of the order Petromyzontiformes, placed in the superclass Cyclostomata. The adult lamprey may be characterized by a toothed, funnel-like sucking mouth. The common name "lamprey" is probably derived from Latin lampetra, which may mean "stone licker" (lambere "to lick" + petra "stone"), though the etymology is uncertain. The plural form lamprey is sometimes seen. There are about 38 known extant species of lampreys and five known extinct species. Parasitic carnivorous species are the most well-known, and feed by boring into the flesh of other fish to suck their blood but only 18 species of lampreys engage in this micropredatory lifestyle. Of the 18 carnivorous species, nine migrate from saltwater to freshwater to breed (some of them also have freshwater populations), and nine live exclusively in freshwater. All non-carnivorous forms are freshwater species. Adults of the non-carnivorous species do not feed they live off reserves acquired as ammocoetes (larvae), which they obtain through filter feeding. Learn more about Lamprey