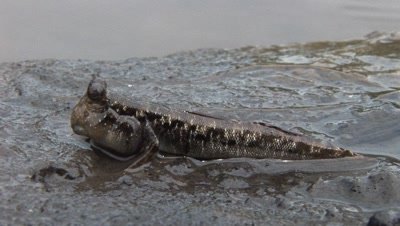 Mudskippers are amphibious fish, presently included in the family Oxudercidae, in the subfamily Oxudercinae. There are 32 living species of mudskipper. Mudskippers are known for their unusual looks and the interesting abilities that they possess for being a fish that can survive both in and out of water. They can grow up to twelve inches long and most of them are a brownish green color that range anywhere from dark to light. During mating season the males will also develop brightly colored spots on them in order to attract the females. The spots can be red, green and even blue. They are also known for their protruding eyes found on the very top of their flat head. Their most noticeable feature however is their side pectoral fins that are located more forward and under their elongated body. These fins function a lot like the legs of a human or any other animal in that they allow the mudskipper to move from place to place. Although having the typical appearance of any other fish, these forward fins allow the mudskipper to “skip” across muddy surfaces and even give them the ability to climb trees and low branches. Because of these fins, mudskippers have also been found to be able to leap distances of up to two feet. They typically live in burrows in intertidal habitats, and exhibit unique adaptations to this environment that are not found in most intertidal fishes, which typically survive the retreat of the tide by hiding under wet seaweed or in tide pools.These burrows ar... Learn more about Mudskipper