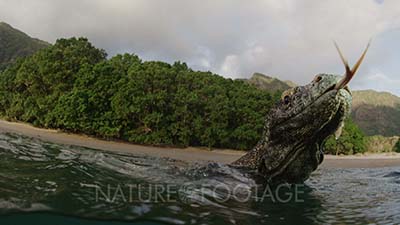 Komodo dragon ( Varanus komodoensis ) are the largest of all monitor lizards and are also the largest venemous reptile on the planet.

They are only found on on the Indonesian Islands of Komodo, Rinca and Flores Islands, Gili Motang and Padar. Growing up to 3m (10 feet), they are an impressive beast that uses its strength, stealth and eternal patience to take down prey much larger than themselves. They not only have bacteria laden saliva which slowly poisons its prey when bitten but also, as recent discoveries on the species show, they also have poisonous fangs (similar to snakes) which deliver the extra kill. The saliva of these beasts is not toxic until they are adults and have taken down prey. It is here that the infestation while eating roting flesh begins.

Young Komodo Dragons live on trees and away from adults for the first few years of their lives, avoiding confrontation as older dragons will not hesitate to kill a younger lizard.

Dragons forgo eating during the mating season when all energy is spend protecting a female from other males and mating (shown here on the beaches of Rinca).
Dragons are avid swimmers and these are the first clips where one can appreciate their underwater agility. They seldom dive and are not known to swim long distances to another island, choosing to stay close to shore where they can return to the warmth of the land as their bodies will cool down fast in the fresh Indo Pacific waters of Southern Indonesia.