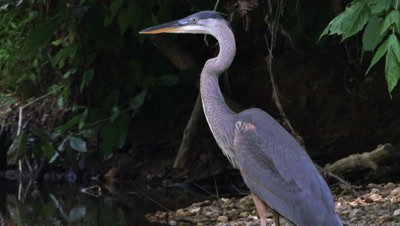 The herons are medium- to large-sized birds with long legs and necks. They exhibit very little sexual dimorphism in size. The smallest species is usually considered the dwarf bittern, which measures 25–30 cm (9.8–11.8 in) in length, although all the species in the genus Ixobrychus are small and many broadly overlap in size. The largest species of heron is the goliath heron, which stands up to 152 cm (60 in) tall. The necks are able to kink in an S-shape, due to the modified shape of the cervical vertebrae, of which they have 20–21. The neck is able to retract and extend, and is retracted during flight, unlike most other long-necked birds. The neck is longer in the day herons than the night herons and bitterns. The legs are long and strong and in almost every species are unfeathered from the lower part of the tibia (the exception is the zigzag heron). In flight, the legs and feet are held backward. The feet of herons have long, thin toes, with three forward-pointing ones and one pointing backward. The bill is generally long and harpoon-like. It can vary from extremely fine, as in the agami heron, to thick as in the grey heron. The most atypical bill is owned by the boat-billed heron, which has a broad, thick bill. The bill, as well as other bare parts of the body, is usually yellow, black, or brown in colour, although this can vary during the breeding season. The wings are broad and long, exhibiting 10 or 11 primary feathers (the boat-billed heron ... Learn more about Heron and bittern

View All Heron and Bittern Videos