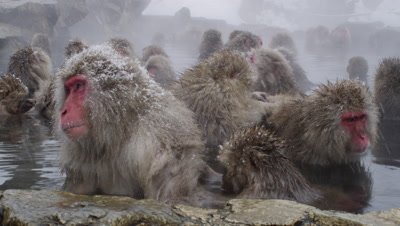 Monkeys range in size from the pygmy marmoset, which can be as small as 117 millimetres (4.6 in) with a 172-millimetre (6.8 in) tail and just over 100 grams (3.5 oz) in weight, to the male mandrill, almost 1 metre (3.3 ft) long and weighing up to 36 kilograms (79 lb). Some are arboreal (living in trees) while others live on the savanna diets differ among the various species but may contain any of the following: fruit, leaves, seeds, nuts, flowers, eggs and small animals (including insects and spiders). Some characteristics are shared among the groups most New World monkeys have prehensile tails while Old World monkeys have non-prehensile tails or no visible tail at all. Old World monkeys have trichromatic color vision like that of humans, while New World monkeys may be trichromatic, dichromatic, or—as in the owl monkeys and greater galagos—monochromatic. Although both the New and Old World monkeys, like the apes, have forward-facing eyes, the faces of Old World and New World monkeys look very different, though again, each group shares some features such as the types of noses, cheeks and rumps.